At present, we focus our education on species native to our beautiful state of South Dakota. All of the education birds at the Black Hills Raptor Center are permanently injured. For some the injury is physical, for others the injury is mental.

Our US Fish & Wildlife Service permit requires that our avian ambassadors be non-releasable. At present we focus our education on species native to our state of South Dakota. 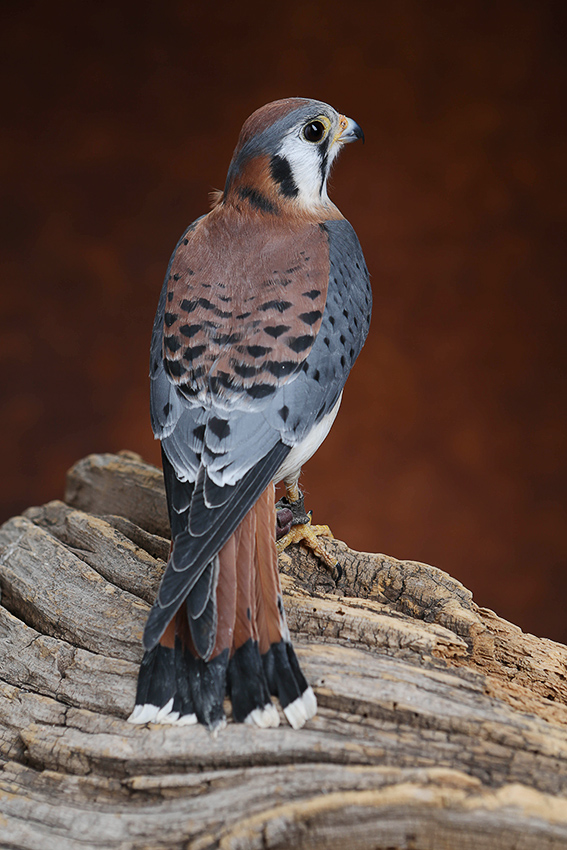 YES! I want a Kestrel/Screech Owl nest box for my property! Click on the image below to see pricing. 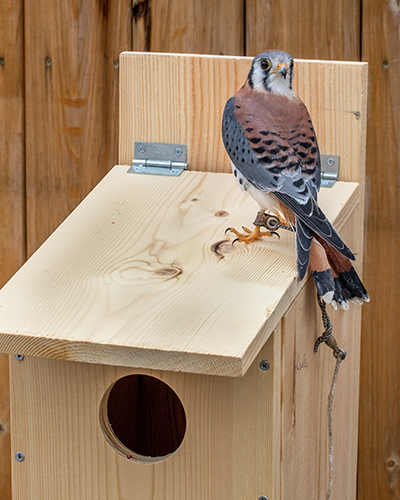 The American Kestrel is the smallest species of falcon in North America, and the most colorful. Colorful is a good description for Hendrix’s personality.

He is an accidentally imprinted bird, which occurred before he joined our organization. At a critical point in his development as a chick, he saw humans instead of other kestrels, so he is confused about his species.

His lack of fear around humans would be very dangerous in the wild but makes him ideal for education. He is quite willing to vocalize in the presence of humans, so you may hear him chattering if he visits your event.

Because most American Kestrels migrate out of South Dakota for the winter months, we provide supplemental heat to keep him warm in winter. This means bringing him into the house of one of our co-founders.

Sounds fun, right? Not so much. Hendrix begins calling at sunrise each day, and won’t stop for about 5 hours. 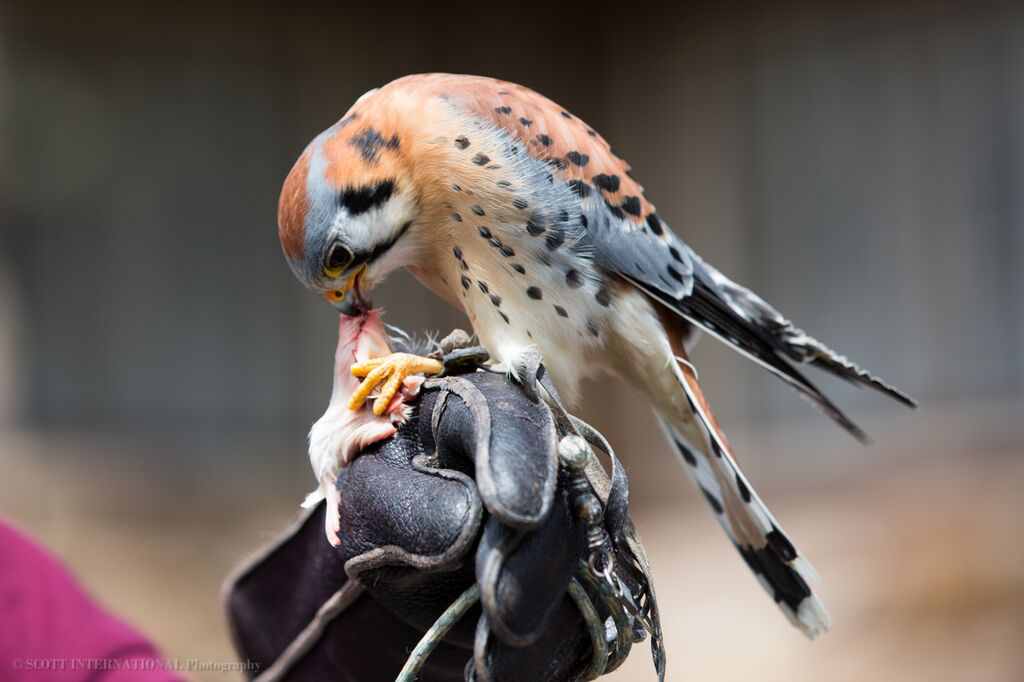 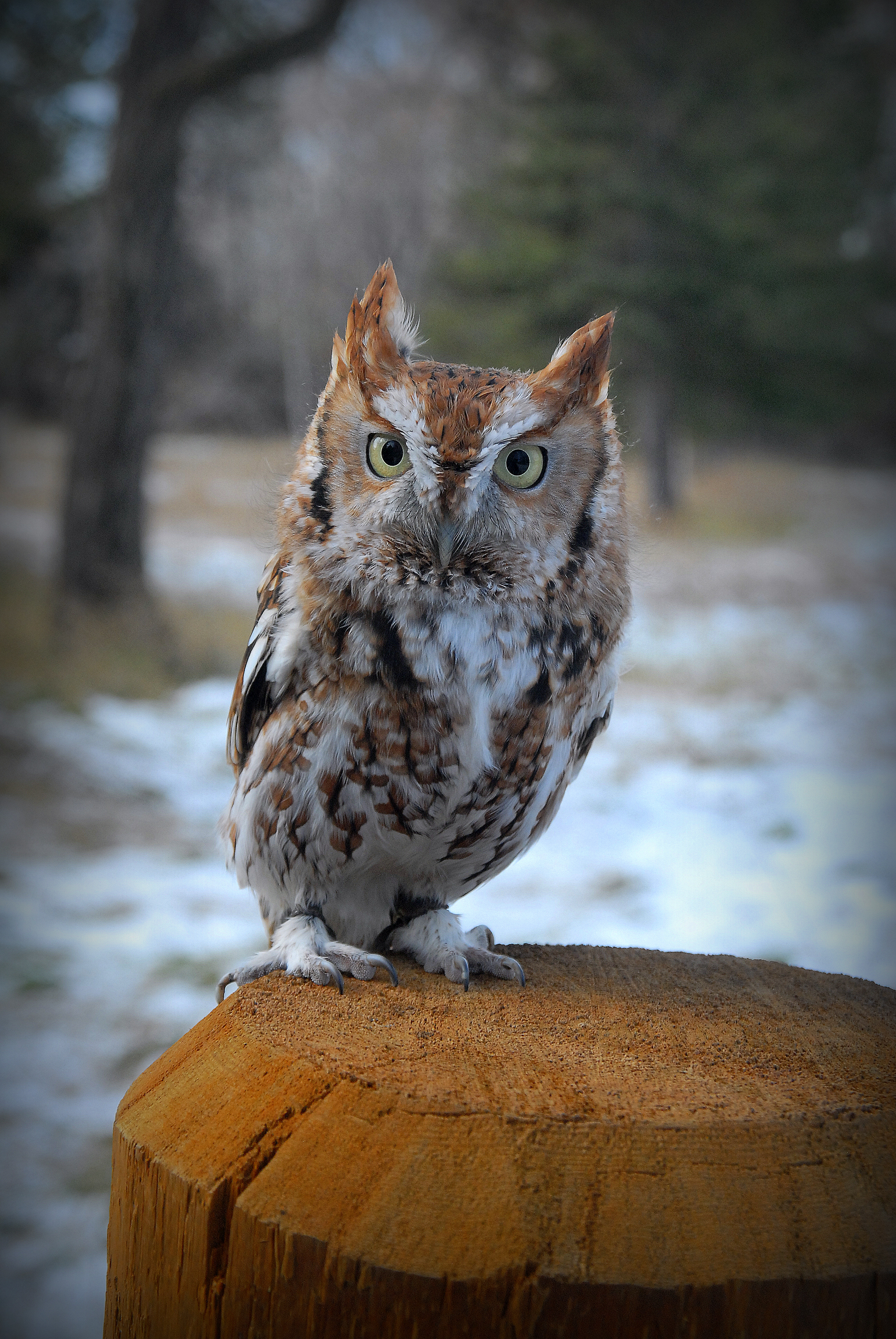 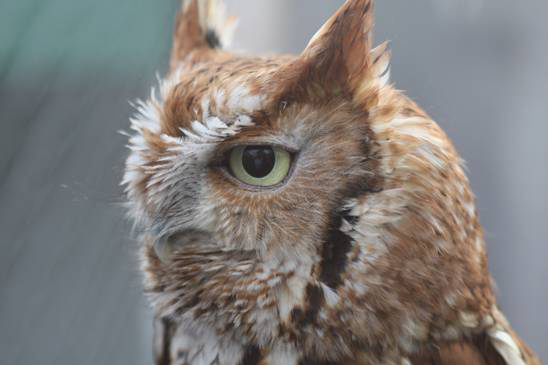 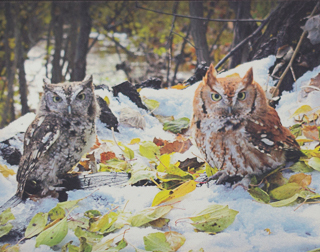 Eastern screech owls have two color phases. The more brown/gray patterning is more common the further west you travel in the bird’s range. “”Little Red” has no vision in one eye, and it is limited in the other. The injury was likely caused by a collision with a vehicle. She came to the Raptor Center from Raptor Rehabilitation of Kentucky, Inc. in Louisville.

Typically non-vocal, eastern screech owls are a very common species. While children’s stories tell us that owls “hoot”, the eastern screech owl has several calls and none of them are at all close to a “hoot”! Listen here for a couple different calls that are common. https://www.allaboutbirds.org/guide/Eastern_Screech-Owl/

Most often screech owls will call in the springtime, as they first seek a mate. Calls also serve to keep the pair bond strong while the young are being raised and fledged from the nest.

Look for eastern screech owls in broken off tree branches, or hollows in tree trunks.

While these little owls are common, their size, camouflage, and nocturnal habits make them challenging to find on walks through the woods.

Their camouflage is made even better by their uncanny ability to stand without moving for hours on end.

It is important for a screech owl to be still in order to survive undetected – plenty of predators would be happy to make a snack of these tiny owls. 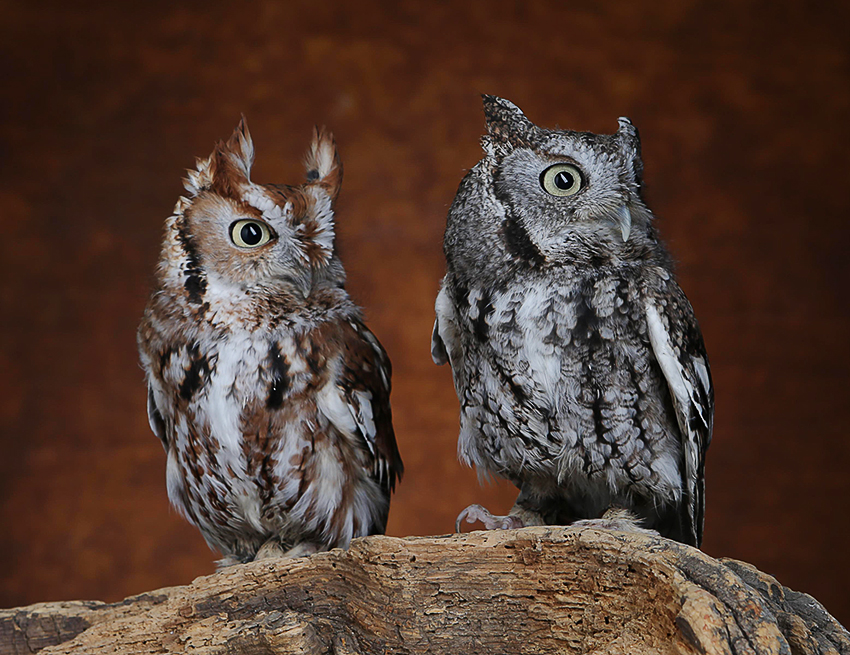 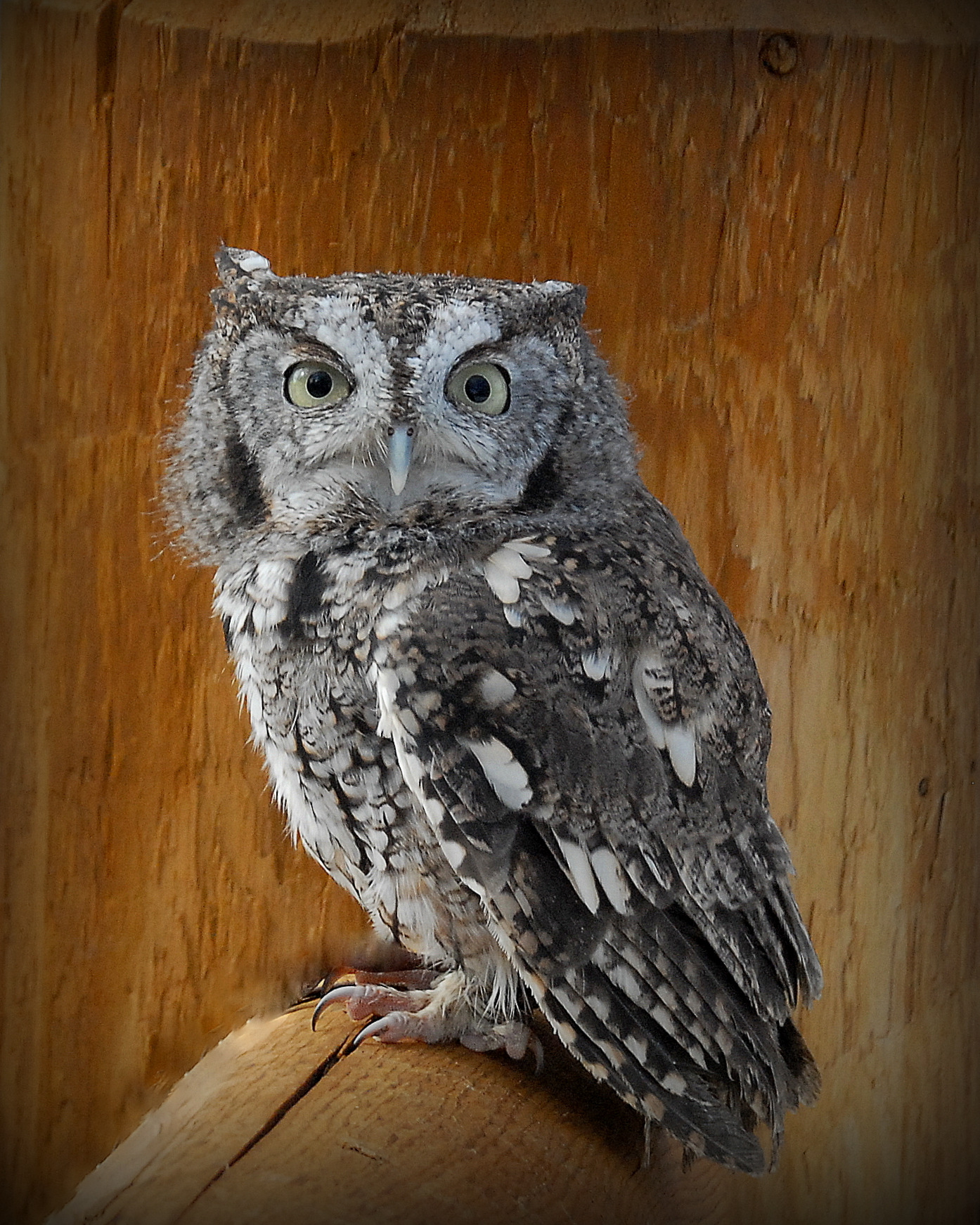 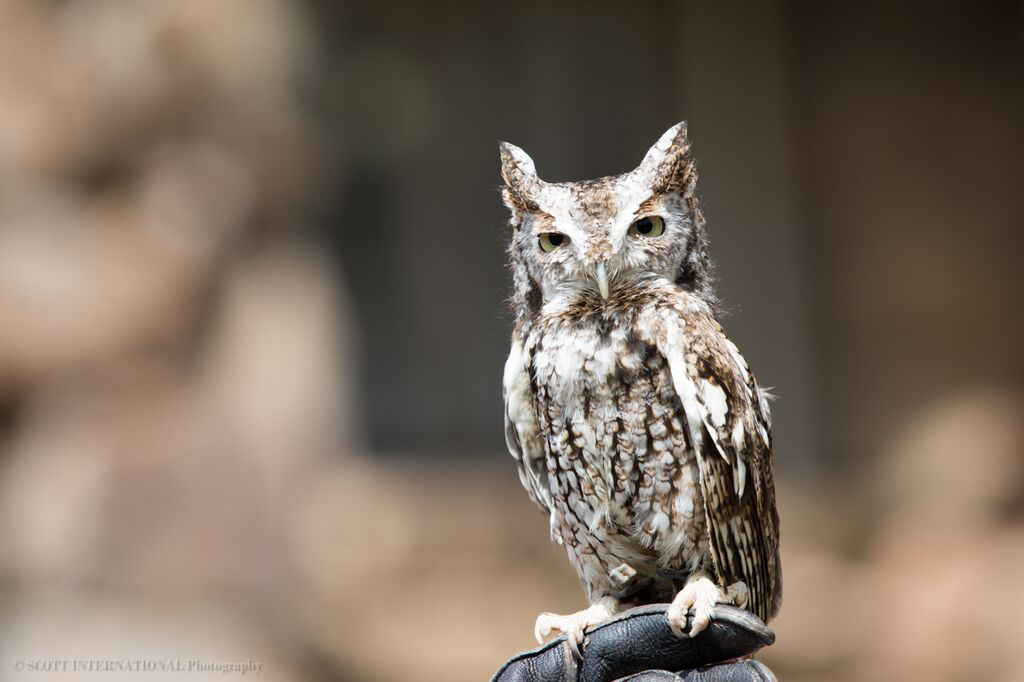 Red-tailed hawks are likely the most common bird of prey in North America. They thrive in many different habitats – open country, woodland, mountains, and more. You can see these familiar birds perched upon fenceposts throughout the state. Now you can see one in your classroom!

Freya was hatched in 2018 in northeastern South Dakota and is nonreleasable due to broken wing bones that healed incorrectly. She is flighted, but not strongly enough she can hunt on her own.

Keen eyesight allows these hawks to hunt prey from high in their air as they soar, or from the comfort of a perch. Prey ranges in size from rats to rabbits! 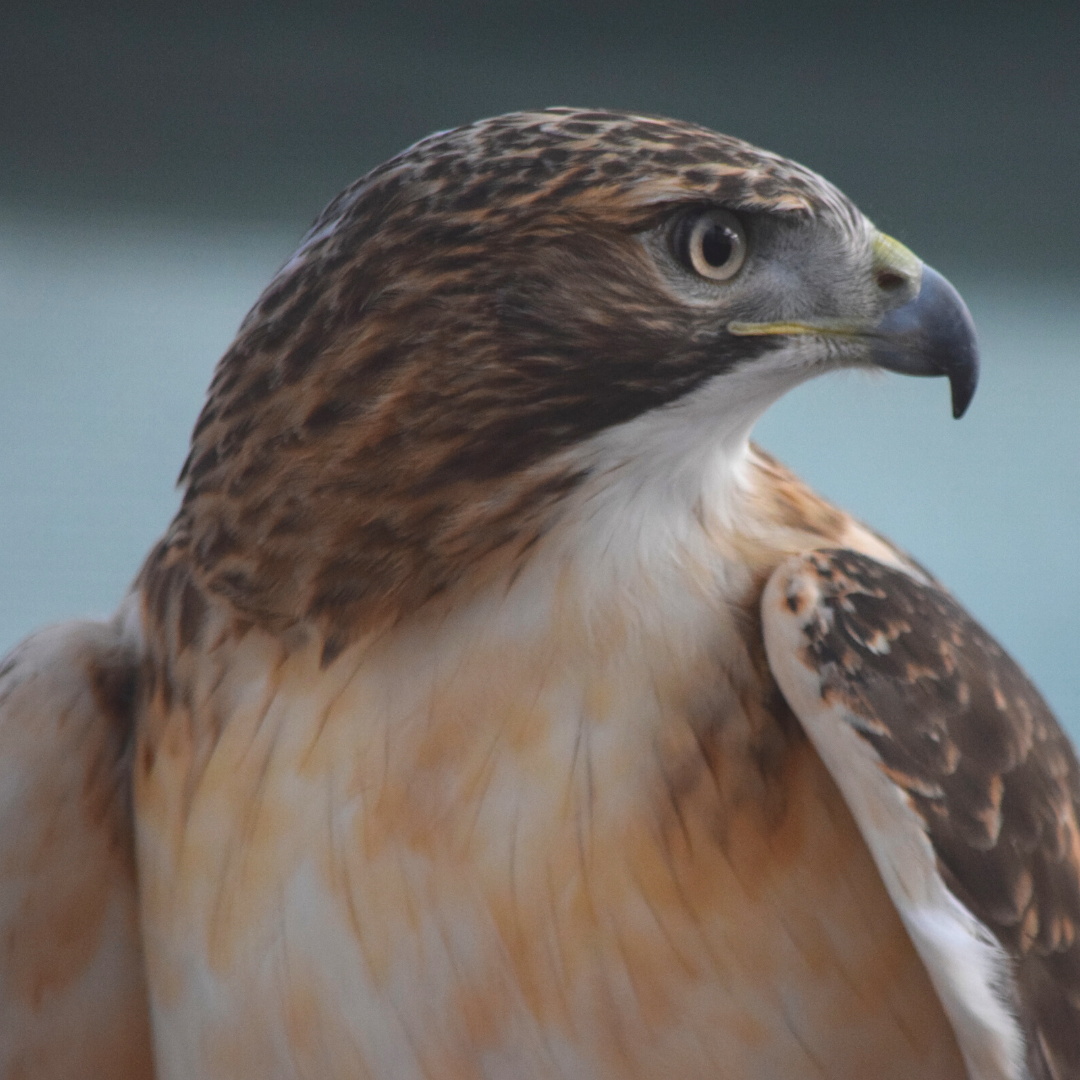 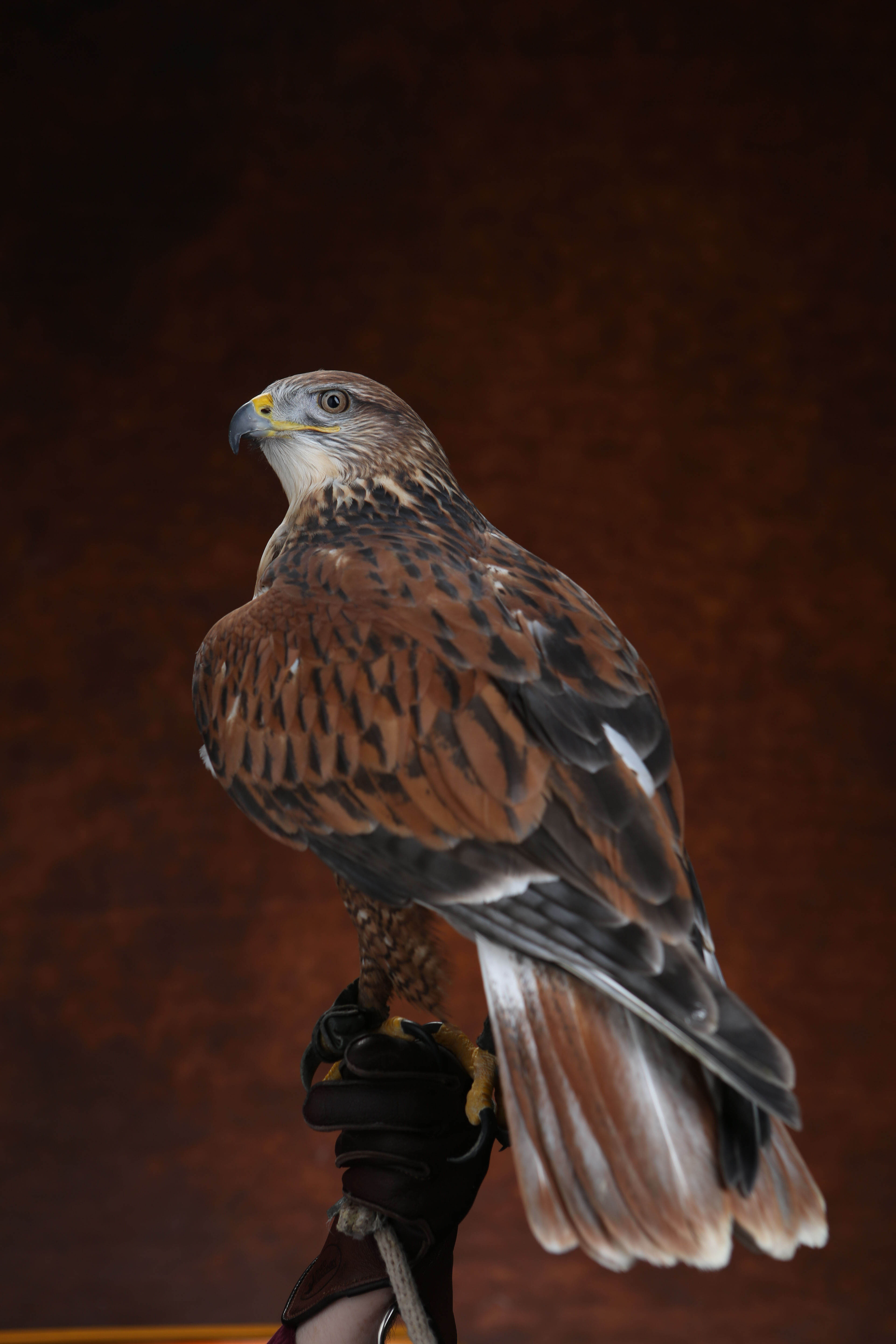 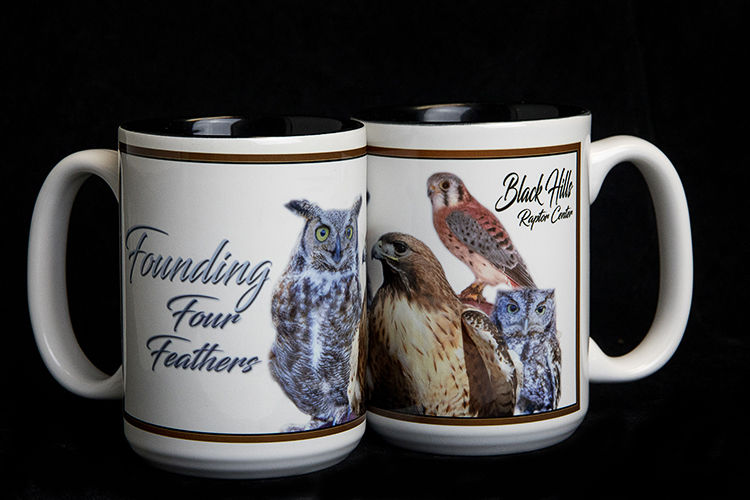 The queen of the prairie! The Ferruginous Hawk is the largest North American buteo, which is a group of hawks that share broad wings for soaring and a more laid-back hunting style. Ferruginous hawk food items include prairie dogs, gophers, and large snakes. Most are very fierce and formidable birds. They have to be, in order to survive. They nest and eat on the ground, leaving them vulnerable to other predators.

Phoenix is a victim of the West Nile Virus, which caused her to have permanent brain damage. Hunting for herself is no longer possible.

Unlike most Ferruginous hawks, she is fairly easy to handle and deals well with being an avian ambassador. We think the disease that grounded her has changed her personality. 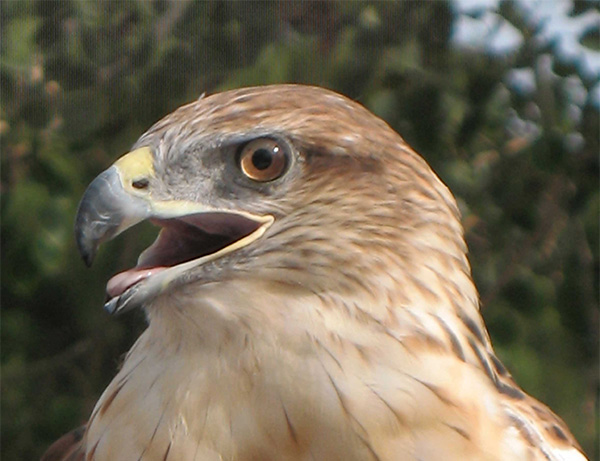 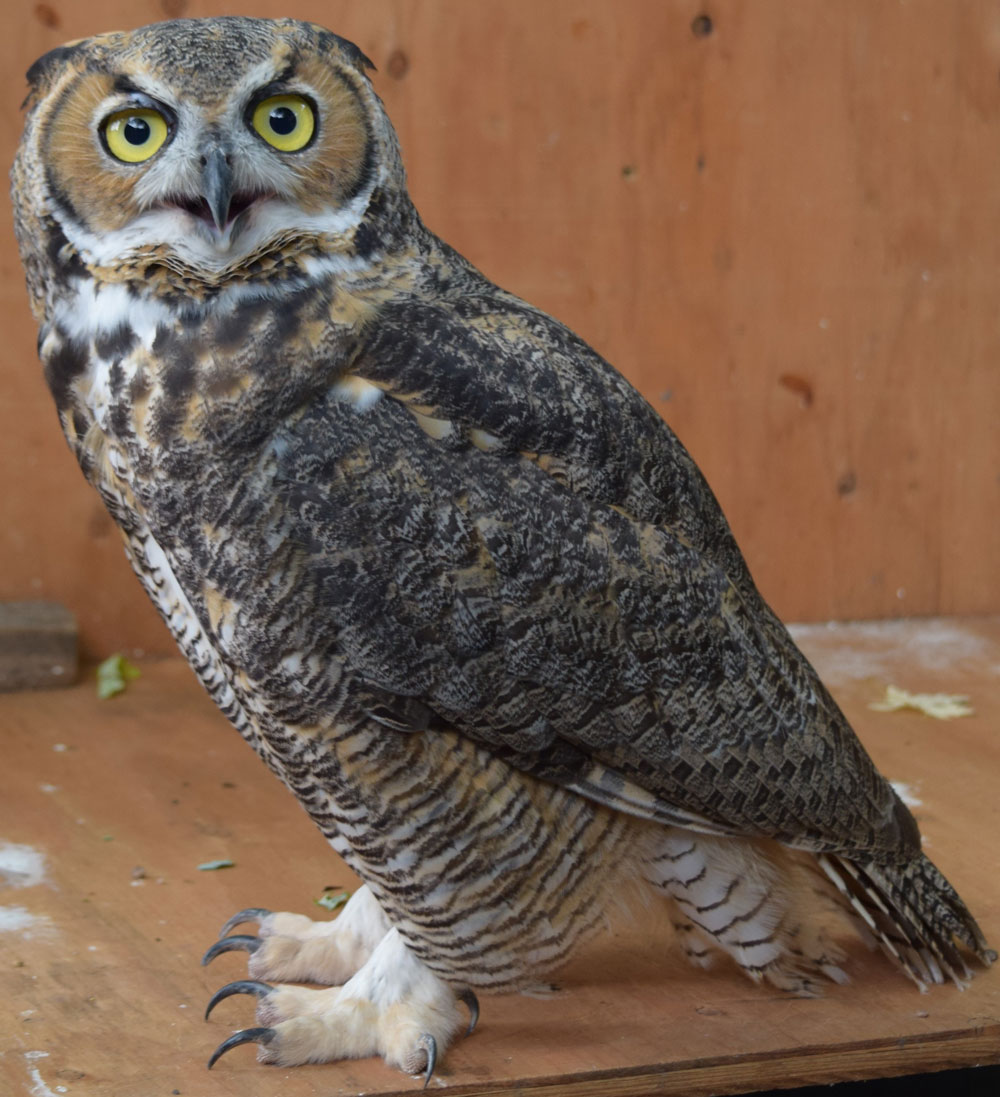 Meet Aldo! Aldo was hatched in spring near the town of Tabor, SD. Somehow he ended up on the ground, just before the April 10, 2019 blizzard. As the snow fell, his parents were nowhere to be seen. A ranch family brought him in to their barn for shelter. Despite their best efforts to not have the bird associate people and food, the owlet did imprint.

He was taken to the Bramble Park Zoo in Watertown, and joined us at the Black Hills Raptor Center in August 2019. Aldo is named for conservationist and writer Aldo Leopold. He was named by our donors in a naming contest that raised $843 towards the cost of his care and food!

If you have never read his works, may Aldo the owl suggest you pick up A Sand County Almanac? It is a wonderful set of essays. 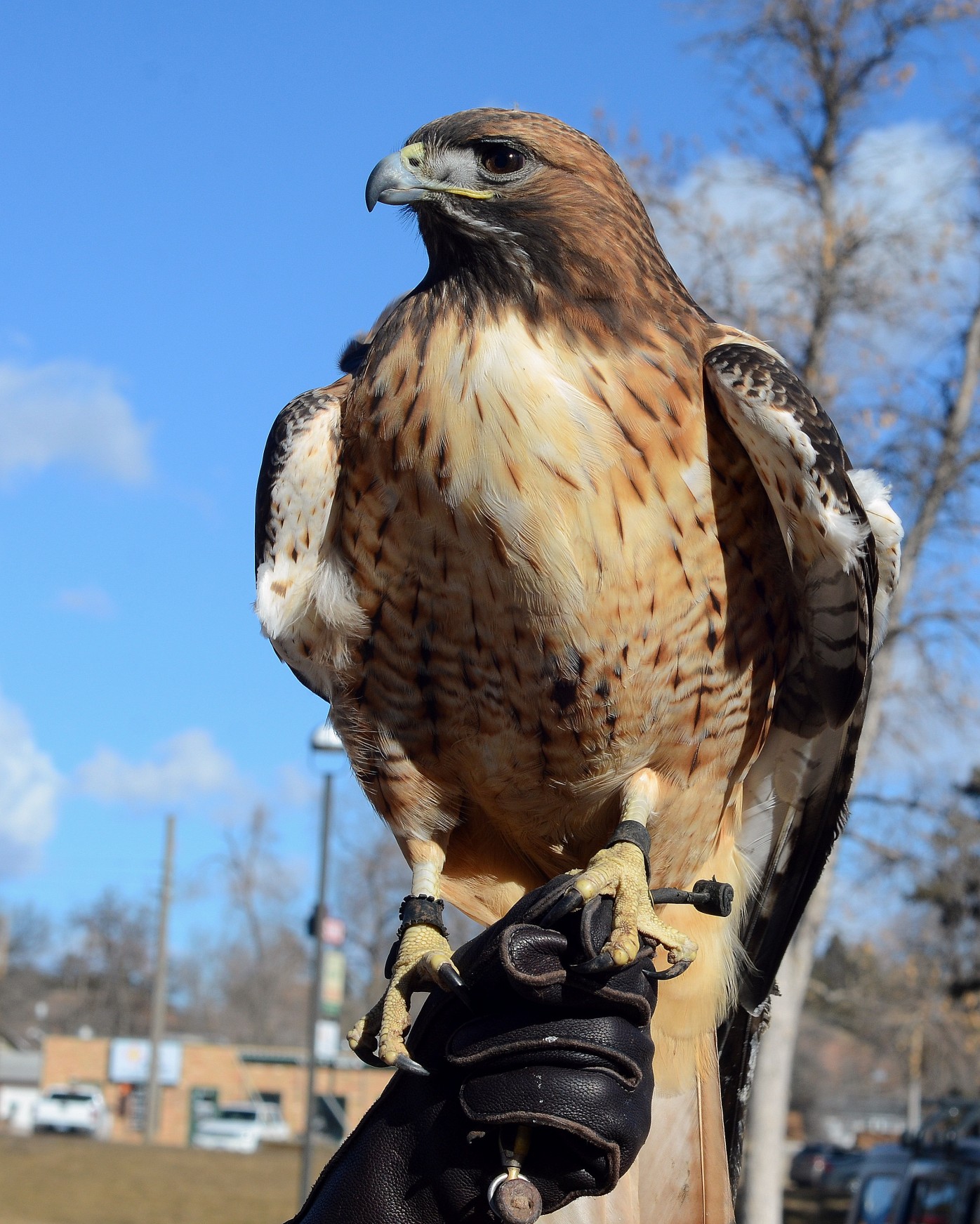 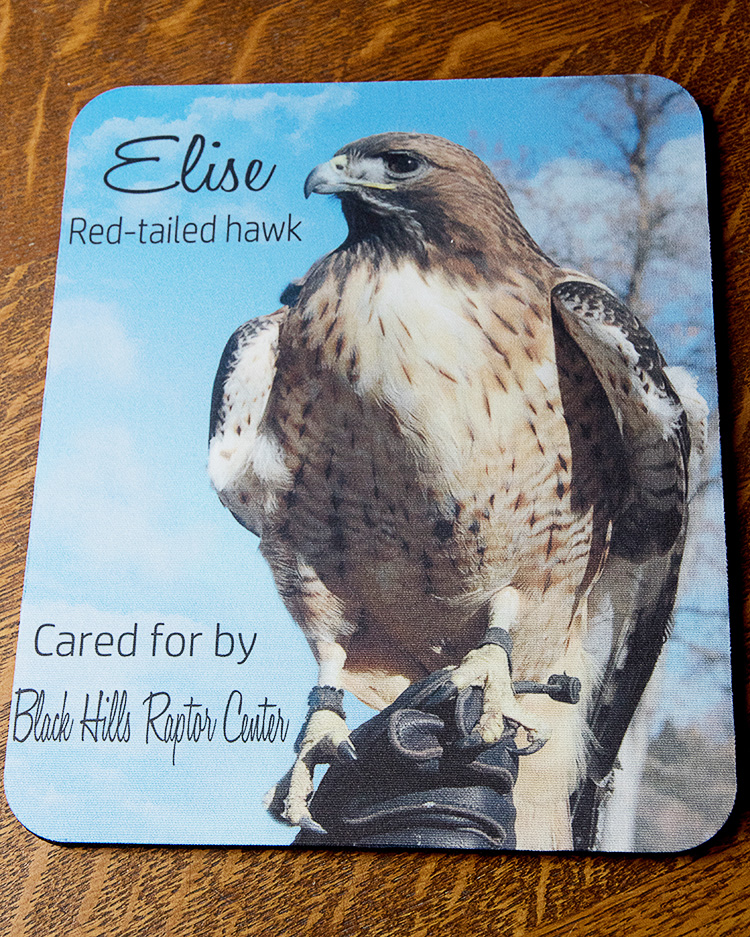 Click on the mouse pad image to purchase today.

Elise, our prima donna was hatched in Arizona in 1989. Stolen from her nest by people who wanted a unique pet, she became imprinted on humans. When rescued by the Arizona Game & Fish services, she was terribly sick from being fed an incorrect diet.

Elise came to South Dakota in 1990. In South Dakota she was doing flight shows at the Reptile Gardens. Eventually she began to be part of school educational presentations. Elise has been with the Black Hills Raptor Center since our founding in 2010!

As an educational ambassador for all birds of prey for BHRC she has visited almost 2,500 classrooms. Because of her advanced age, she is retired from the BHRC’s educational programs. 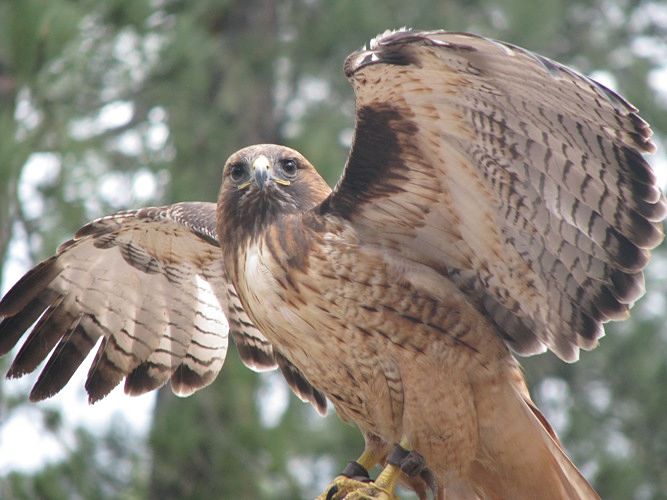 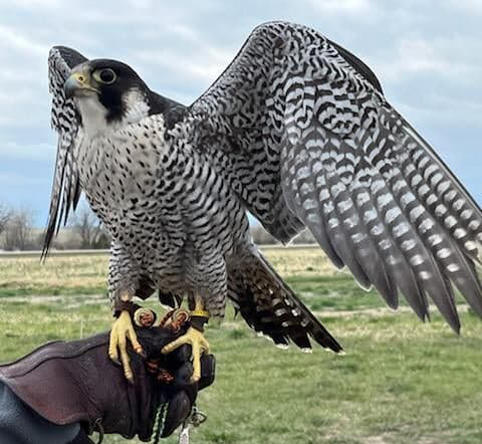 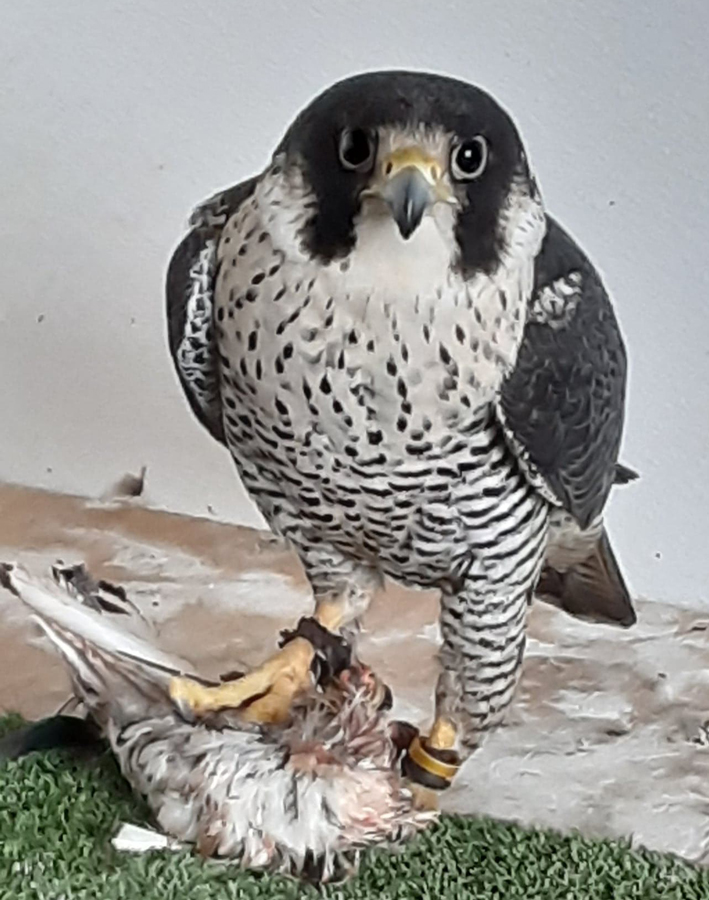 He is small but mighty! Izaak Walton, or Ike, is named for the famous conservationist and English author who lived from 1593 to 1683. This glorious raptor joins our two kestrels in representing the falcon family in our programs.

Ike was hatched in 2020, as part of a captive breeding group. Our Board chose to purchase him from his breeder. After 4 years of searching for a non-releasable, rehabilitated peregrine, we found this was the best option for The Raptor Center.

As a male peregrine, Ike is fairly small bodied. He weighs about 620 grams, or 1.4 pounds. Females are much larger. Peregrines eat other bird species, so his diet is a combination of quail, chicken, house sparrow, and European starling.

Ike is in his training process and doing some programs for us. We hope he will be a free flighted bird in programs as he matures. 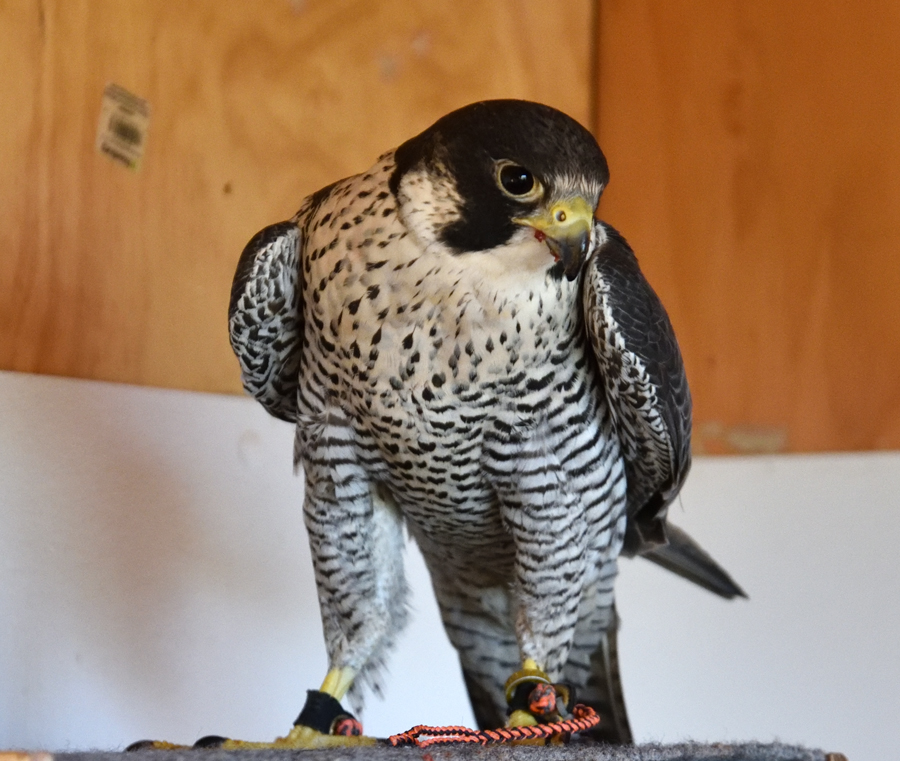 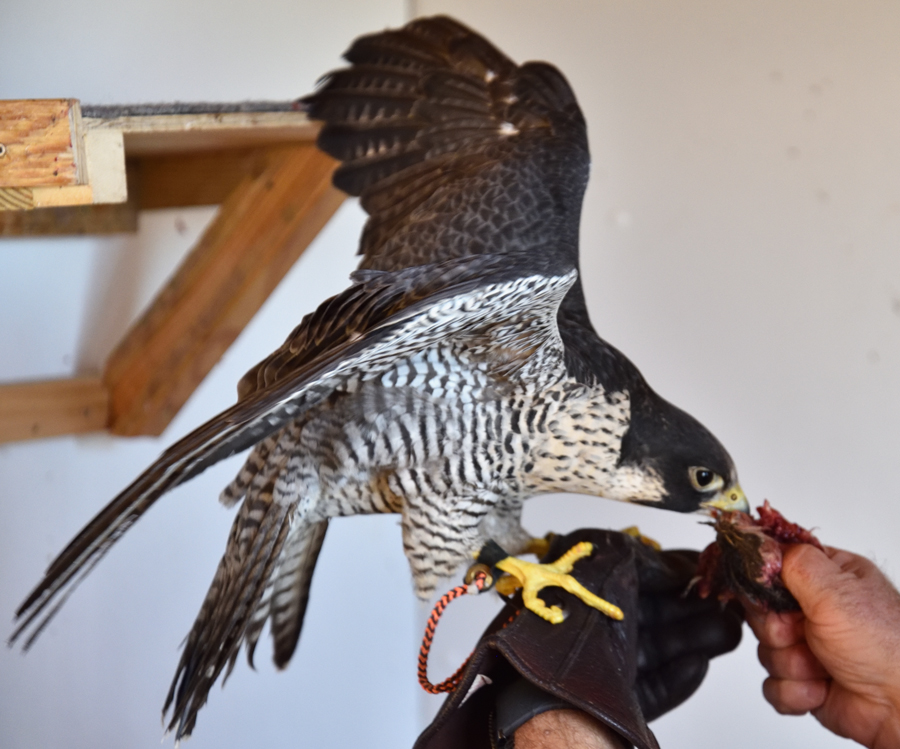 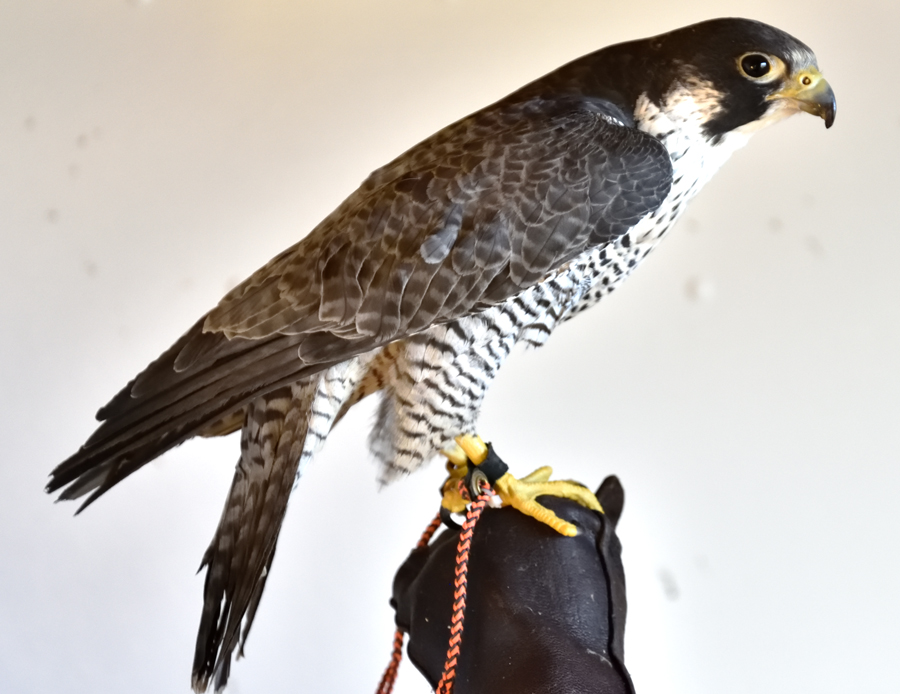 Isn’t she striking?  This small hawk is a broad-winged hawk. She came to the BH Raptor Center from Winged Freedom Raptor Hospital in Spooner, Wisconsin. We held a naming contest, and her name is Gaia, after the Greek Goddess of the Earth.

As a subadult, Gaia contracted West Nile Virus, which is carried by mosquitoes. The medical impact of the virus was vision impairment. She was with a falconer in Wisconsin for a number of months, in the hope that she could be taught to hunt for herself. Unfortunately, the efforts simply proved how much she struggles to see. So, Winged Freedom staff worked to find Gaia a new home where she could be an avian ambassador. And we feel lucky to have her!

This bird is female, and just 2 years old. She should be with our team for many years to come. Gaia rounds out our group of buteos, which include Freya the red-tailed hawk, and Phoenix the ferruginous hawk.

One very cool thing about Broad-winged hawks in South Dakota is that they have moved into the northern Black Hills. This population is not connected to other broad-winged populations in the U.S.A. or Canada. The species prefers larger tracts of deciduous or mixed conifer deciduous forests with openings, and water close by. They have found what they need in Lawrence, Meade, and Pennington Counties.

She eats the equivalent of 3 mice a day. We do offer her a variety of food, including pheasant, chicken, rabbit, rat, and mouse. But in the wild, small rodents are a mainstay in her diet. 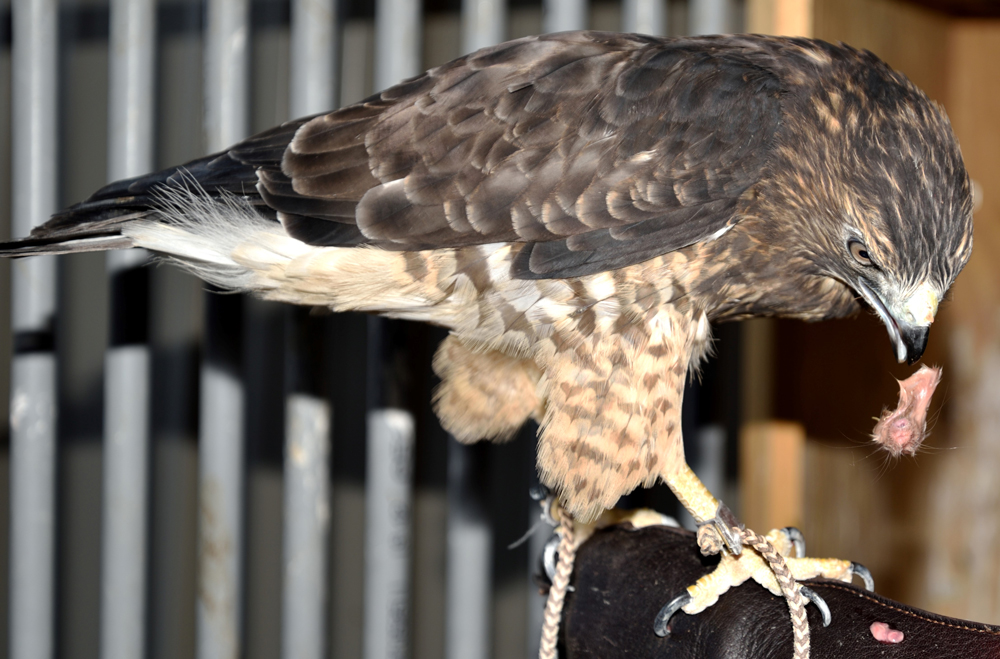 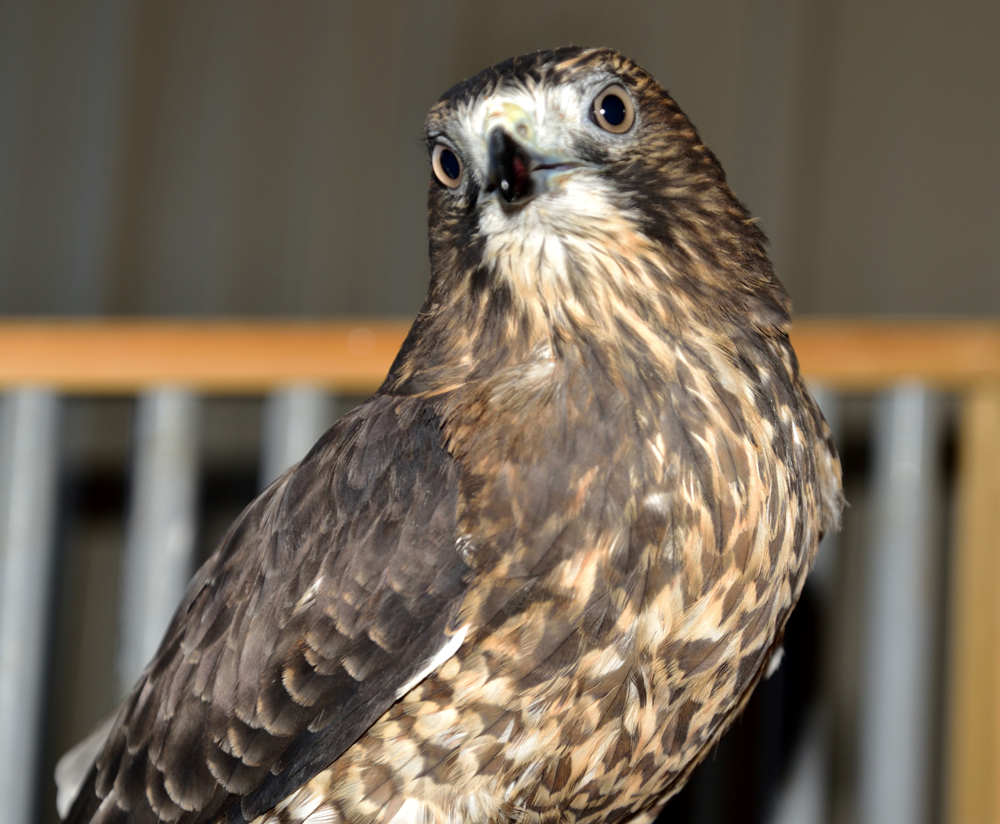 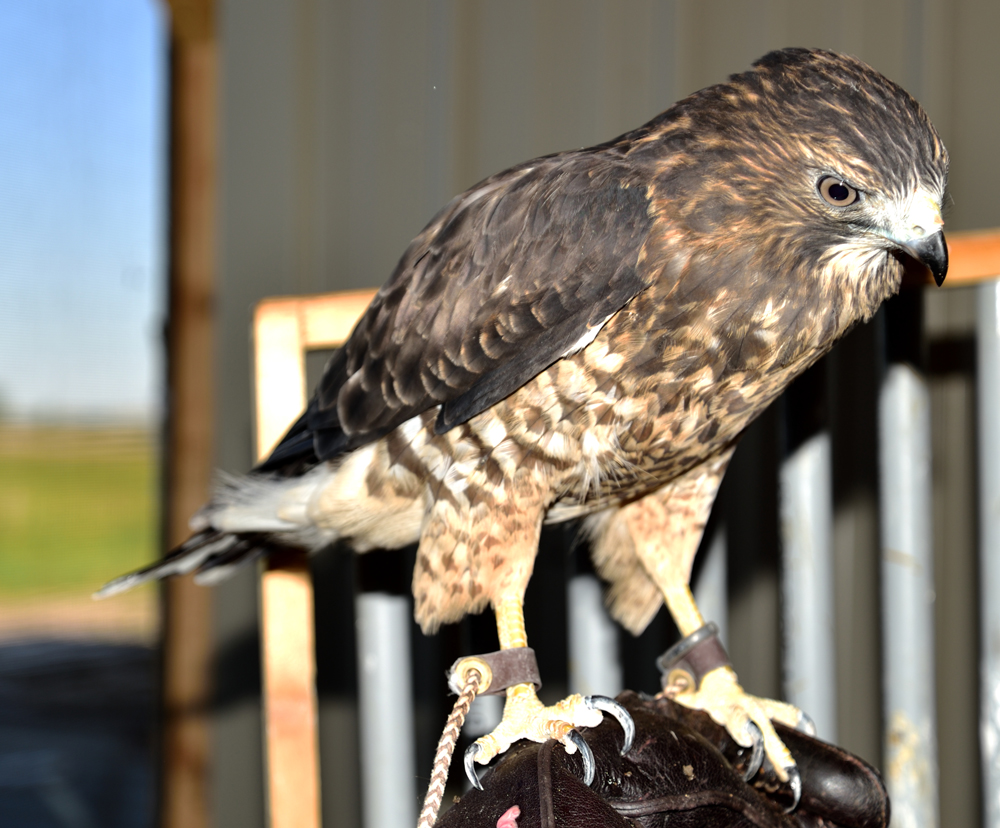 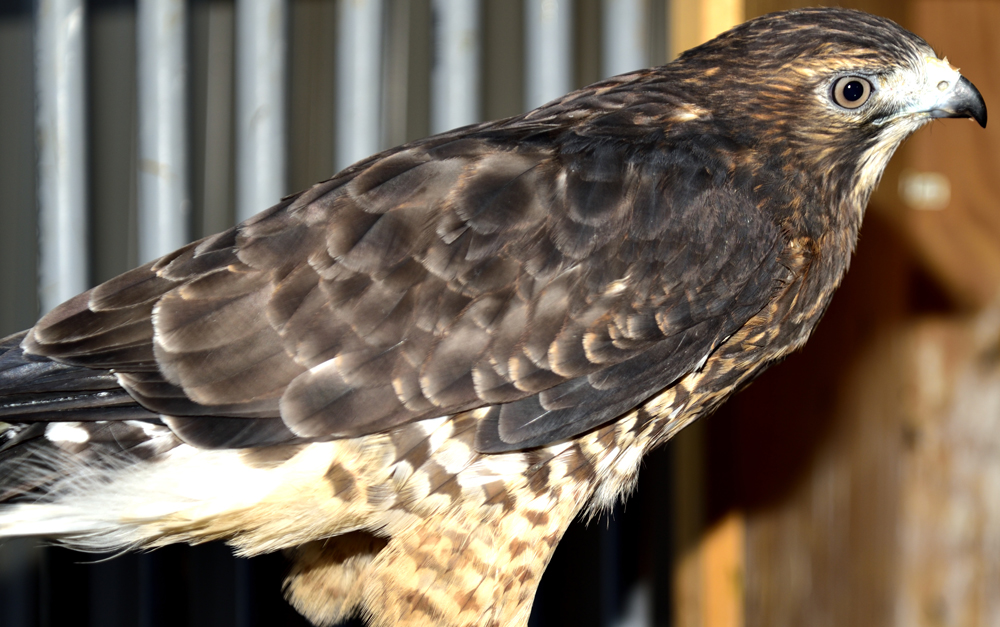 Enjoy the photos of our raptors below.

BHRC is a member of THRIVENT CHOICE

Get In Touch With BHRC