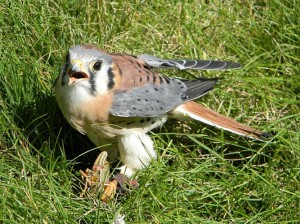 Hendrix, American Kestrel: Hendrix is an imprinted bird. He was with humans at a critical time in his development as a chick, and so he is confused about his species. He has no fear of people, and is quite willing to vocalize. He weighs 4 ounces, or the same as a stick of butter. Grasshoppers are a preferred summer food.